Home | How To Visit Lake Kournas in Crete 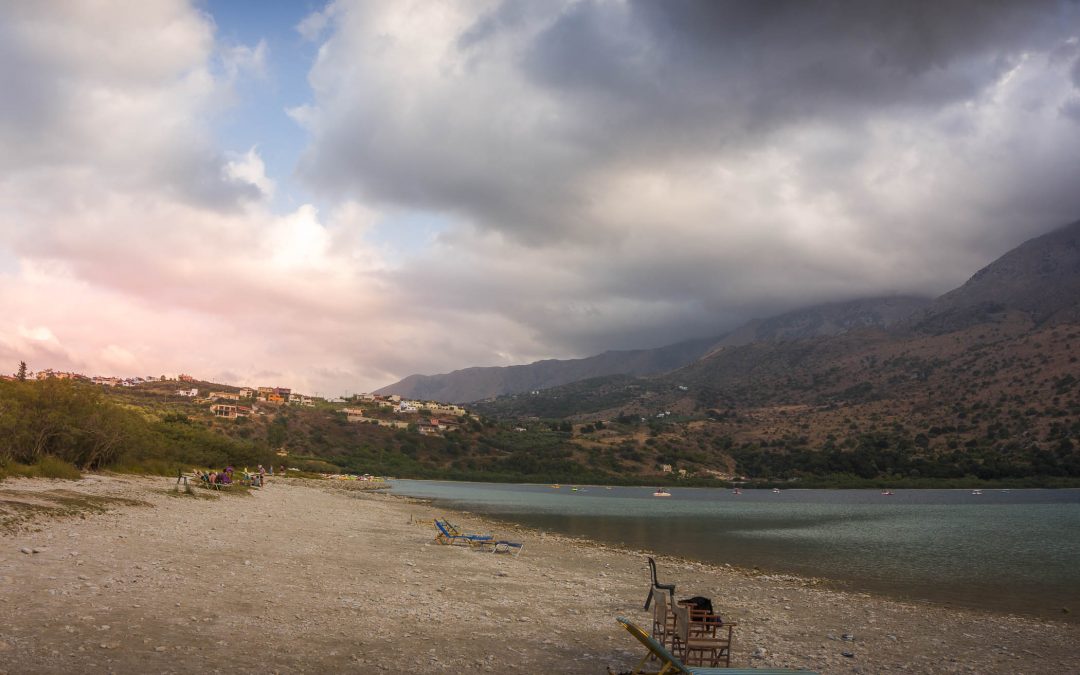 If someone told you that you could go on a Greek island and you had to visit a fresh water lake, would you believe it?

Lake Kournas is at 45 km from Chania Town and it is the only freshwater natural lake on Crete. You can reach it by car, via VOAK, the road that stretches along the northern coast of the island. Just after Giorgioupolis you take the exit to the right and you drive for about three more kilometers on a narrow and windy asphalt road to reach Kournas lake.

After you’ve had enough of the Chania beaches, the lovely Chania Old Town and the cute Rethymno Town, you’ll want to explore the beautiful mountains on the biggest of all Greek islands. Mountains and mountain lakes come to mind. West Crete is the best place to go for a different kind of vacation adventure. Here’s my Crete travel guide, updated with fresh photos and tips. 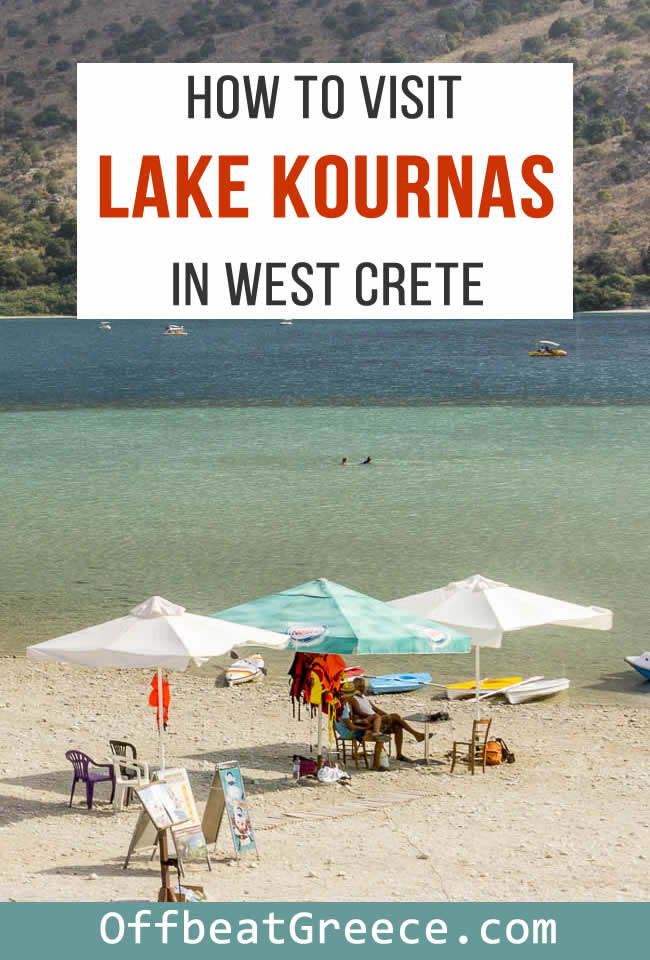 Surrounded by hills and mountains, this natural lake is a Natura 2000 protected area. It hosts a wide variety of flora and fauna. Ducks, geese, cormorants, herons, water snakes, eels, turtles and other animals live here. Its fresh water supply comes from the White Mountains, also known as Lefka Ori, the largest mountain range in Crete.

I’ve been to Lake Kournas twice: once in August 2015 and once in June 2021. I was astounded by the difference in the landscape. The lake and its shores looked different due to the water level.

In August, the water level was very low, so there was a large sandy beach between the restaurants on the lake shore and the beginning of the water. In June, there was almost no beach at all. 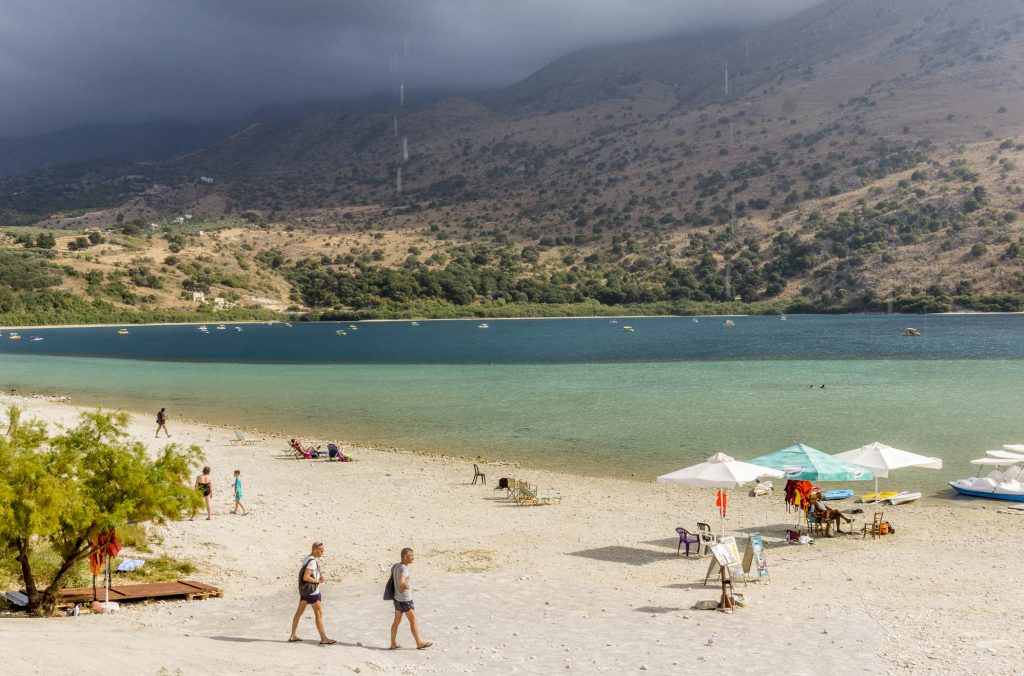 This is Lake Kournas in August 2015, with a large sandy beach stretching along the lake shore. 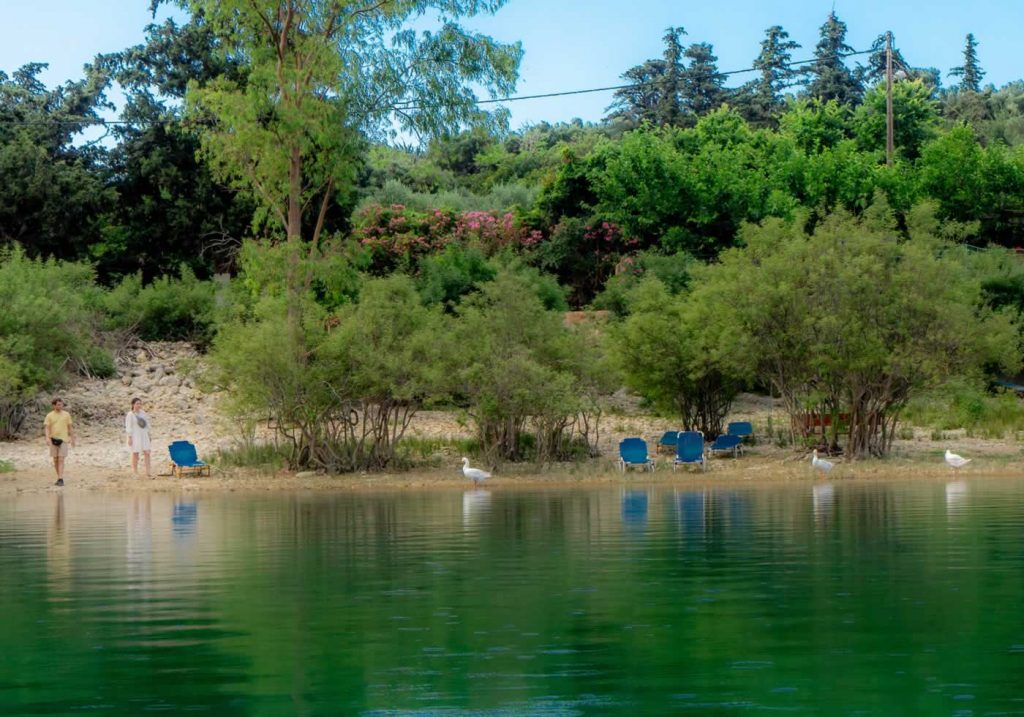 This is the same Kournas Lake in June 2021, when the water was much higher.

The bottom of the lake is covered in weeds, hence the dark color of the water. This dark color made locals believe that Kourna lake is bottomless. Scientists measured it, however, and they found out that the maximum depth is somewhere around 22m. Bottomless or not, this lake is a great place to relax and enjoy the beauty of this Greek island.

Where Is Lake Kournas?

Lake Kournas, or Kourna Lake (as you’ll find it on some road signs), is located in west Crete, in the Chania Prefecture, about 3-4km away from Giorgioupolis, about 45km from Chania Town, and almost 30km from the town of Rethymno. In Greek language, the name of this lake is Limni Kourna. 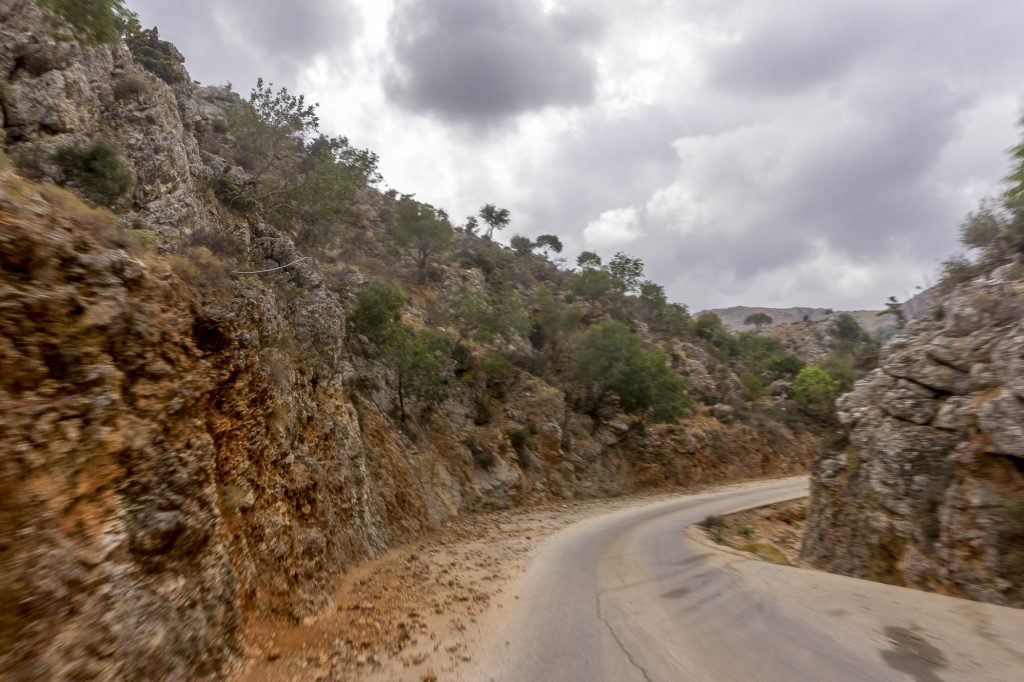 As you can reach it within one hour of driving from Chania Town, it’s easy to understand why Lake Kournas is one of the most popular attractions among locals. People come to spend their weekends on the lake shore, to have a nice meal at one of the tavernas, to take a stroll around the lake or to enjoy a pedalo adventure.

The road from Chania Town to Lake Kournas is good. Some of its sections are rather narrow, but nobody speeds, so you won’t have any problems with that. Here’s the taverna on the deck where you can eat a tasty Dakos, cheese Saganaki and many other Greek specialties. 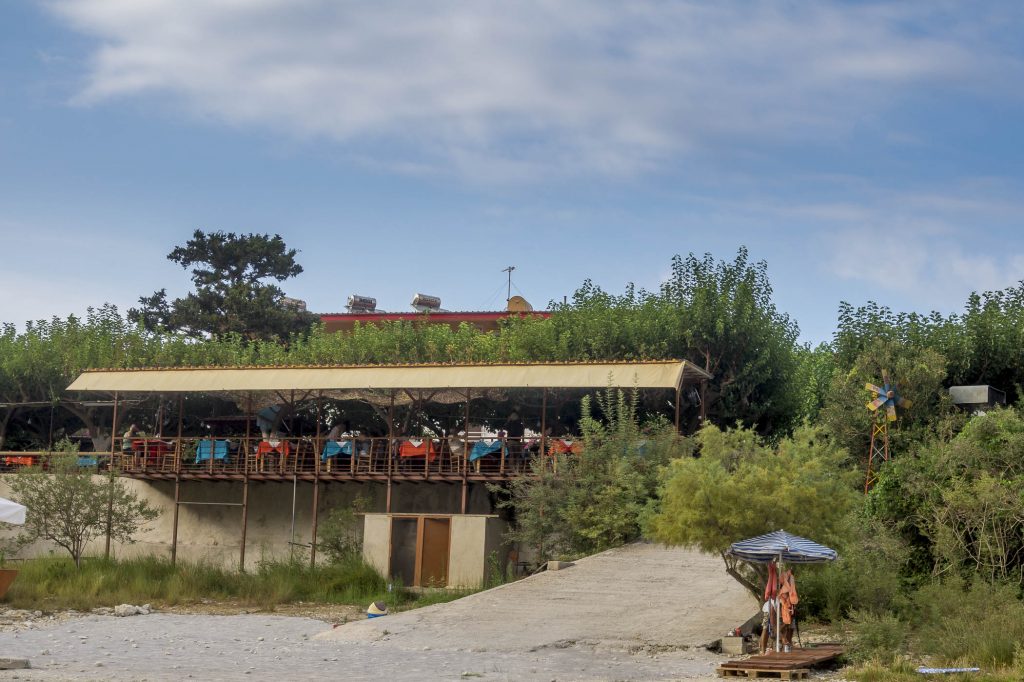 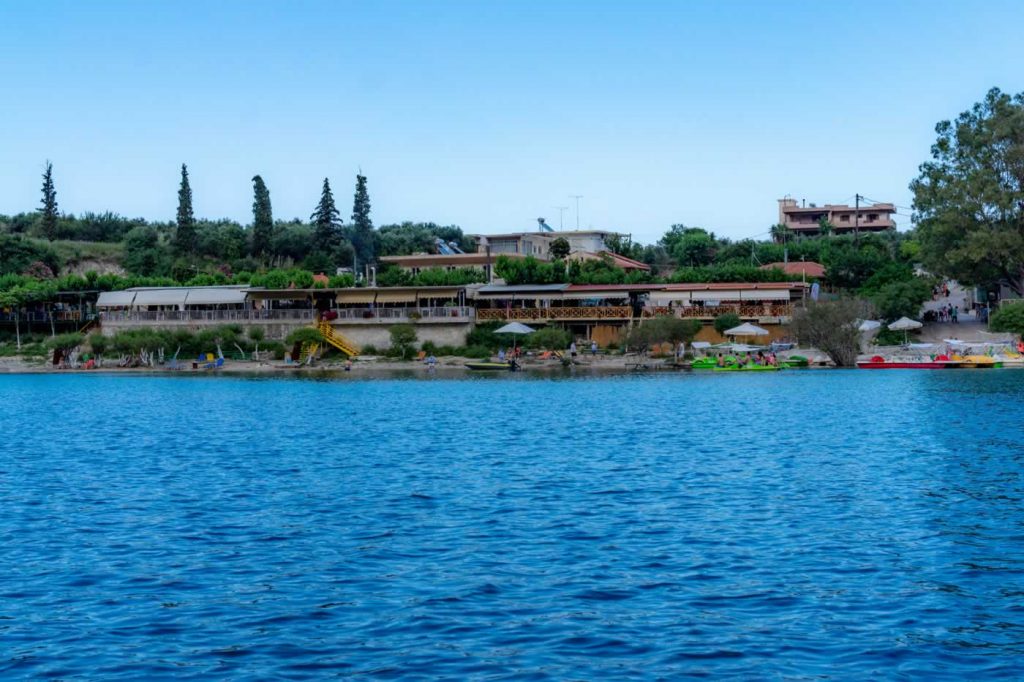 Dakos is a traditional food specialty from Crete. Based on fresh tomatoes, feta cheese, double baked bread and extra virgin olive oil, Dakos is one of the best food choices on the island. Out of all Dakos variants I’ve tried during my stay in Crete, I loved the one at Lake Kournas the most. 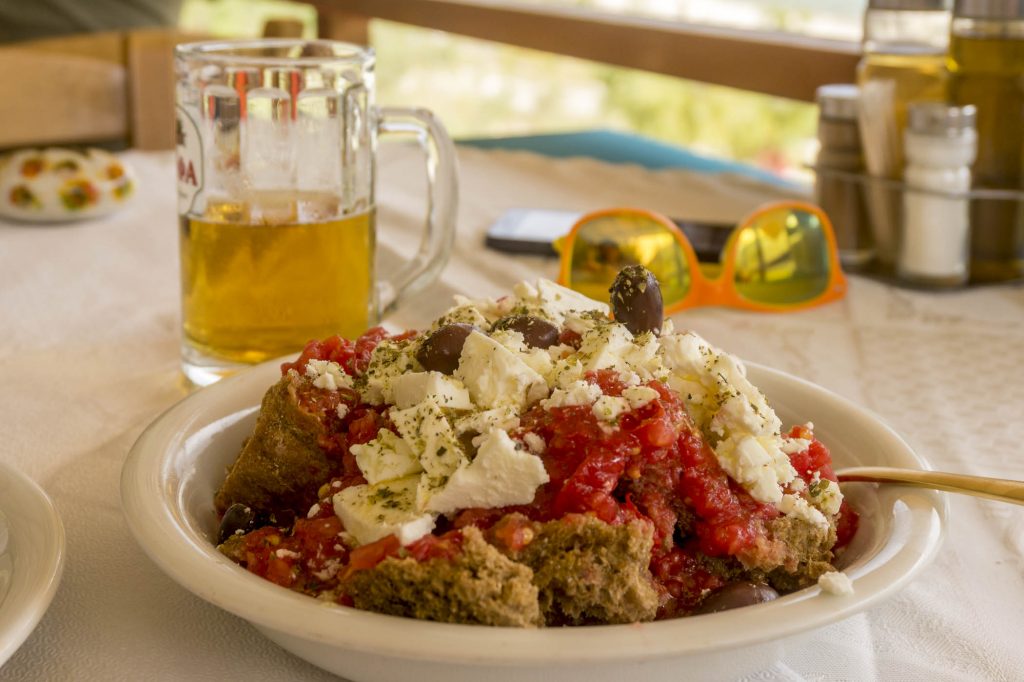 During summer, the water level decreases, exposing a white sand beach. This makes it perfect for sunbathing. That’s actually the time of year when I visited Lake Kournas for the first time, as a day trip from Chania. That was in August, on a very dry summer, so the sandy part was quite large.

I didn’t expect the lake to be so beautiful. Nor did I expect it to look entirely different on my second visit.

How To Get to Lake Kournas?

The best way to get to the lake is by driving. From Chania Town, you don’t need more than one hour to get to the lake. Rethymnon is even closer. If you come from Heraklion, though, you’ll need 1.5 hours to cover the 100km distance. 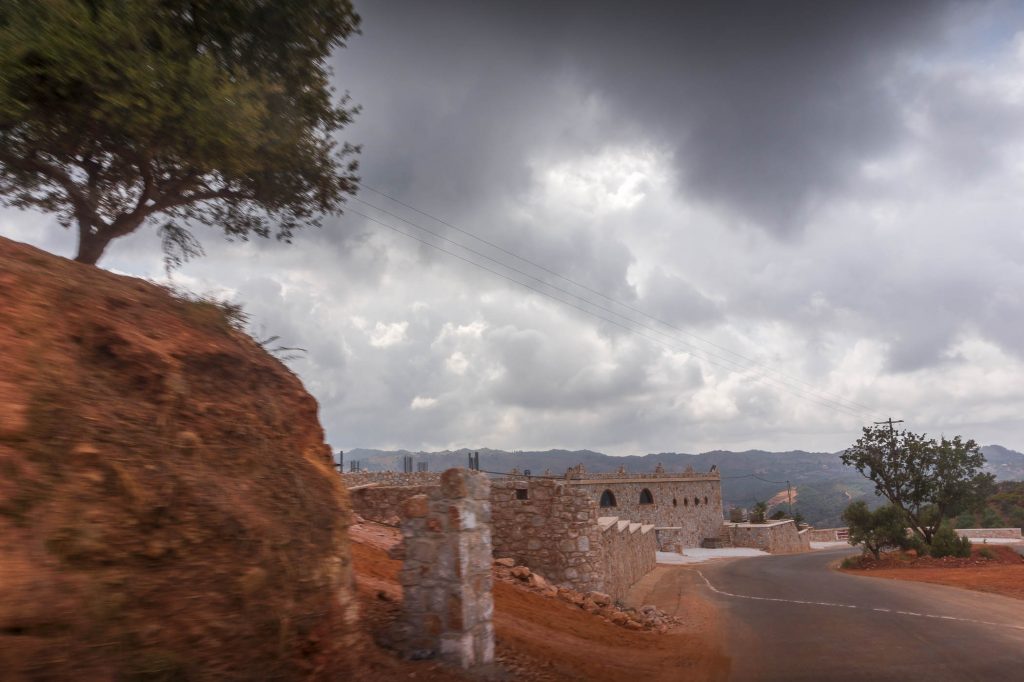 If you don’t want to hire a car, you can take a bus to Giorgioupolis and then walk along the road for about 3km. Be very careful with those buses in Crete, because they don’t run all day long to all directions. Always check the bus schedules to make sure you’ll make it back to your hotel. In terms of comfort, buses in Crete are comfortable and clean. If you wave at them, they will stop and take you even outside the official stops. You can buy tickets from the driver.

What To Do on Lake Kournas?

There are so many things to do in Crete that you can fill one month with activities and trips and still have some left. I spent two months in Crete and I’m yet to visit the eastern part of the island. Lake Kournas is a good spot for enjoying some sunbathing, swimming or canoeing. You can also rent a pedalo boat and have a gym session on the lake.

If you enjoy walking, you can take a hike around the lake. Although I’ve read in many places that you can take a full tour of the lake by foot, I’m not sure if this is indeed possible.

July 2021 update: No, you can’t take a hike around the lake, unless the water level is extremely low.

If you’re lucky, you may see some turtles. I’ve only seen fish, but here’s another article with photos of the turtles in Lake Kournas. 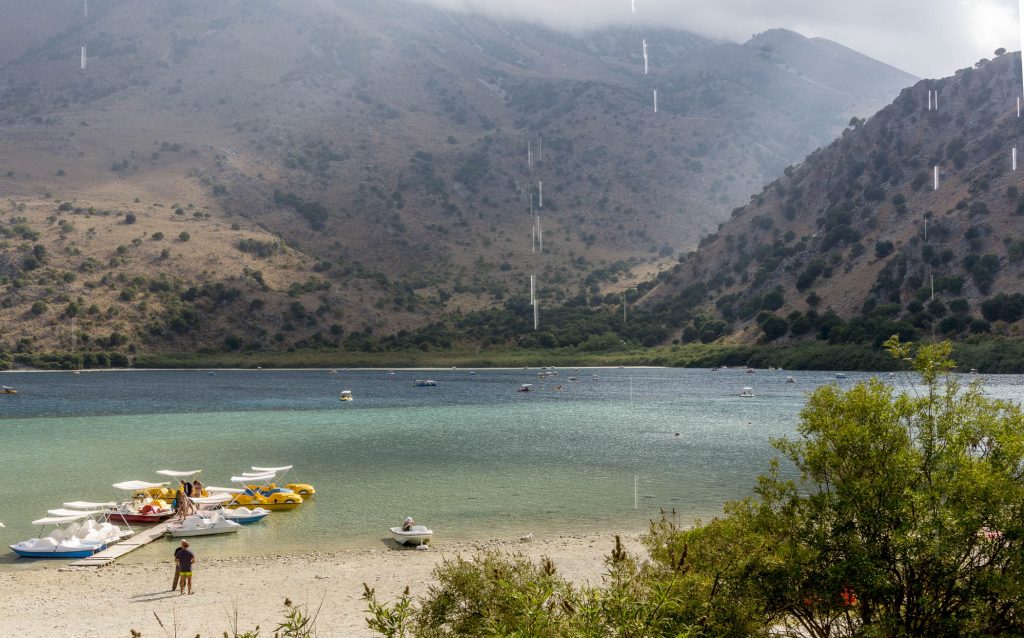 I think this is one of the offbeat places in Greece that are yet to be discovered by tourists. Since there aren’t any tourist buses dumping their human load on the lake shore, you can enjoy the beauty of this place without having to put up with the crowds.

I think you can easily tell which of my Kournas Lake photos are from August and which ones are from July (just look at the size of the sand stretch and you’ll get my point).

What To Bring with You to Lake Kournas?

As there’s not much natural shadow, make sure you bring a sun hat and wear sunscreen. Some of the pedalo boats have a canopy, but your hat will keep you safe at all times. Bring some drinking water for the road (and perhaps some snacks). The tavernas and the restaurants by the lake are very good, so you don’t have to worry about the selection of foods. You’ll find enough options to satisfy even the most fussy eaters. 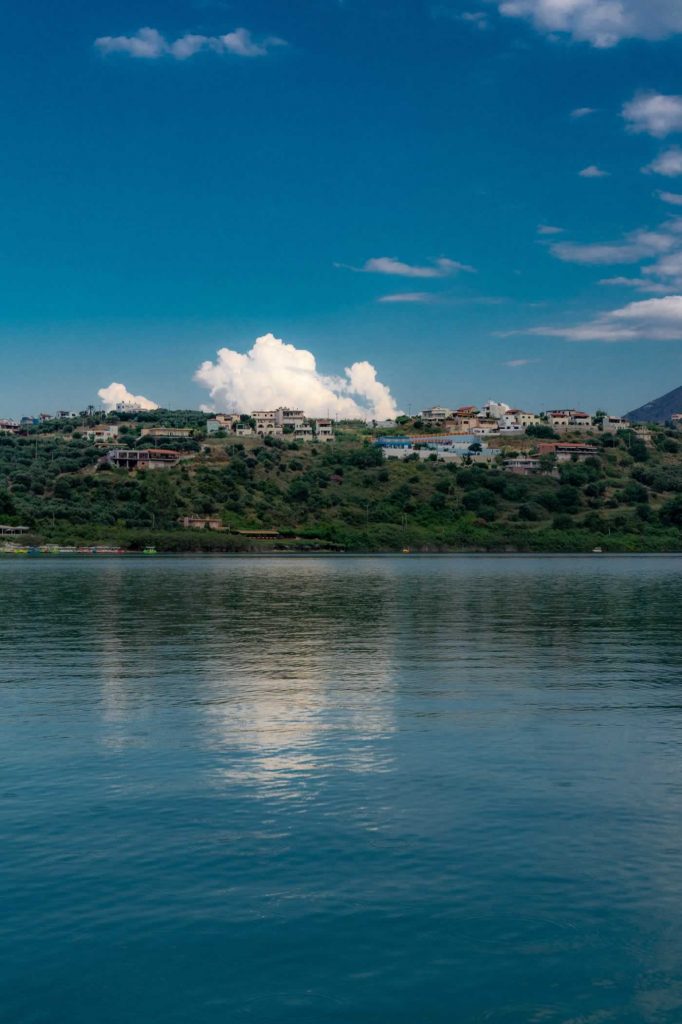 View from the pedalo boat on Lake Kournas 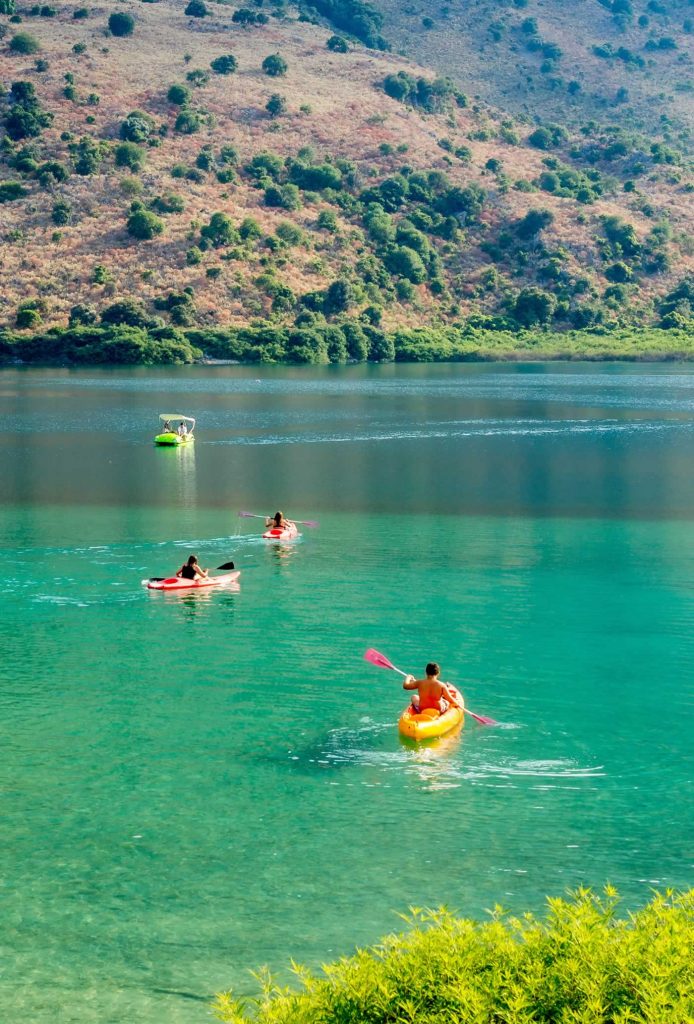 Kayaks are also available for rent on Lake Kournas

Do you want to save this article about Lake Kournas in Crete for later? Pin it here! 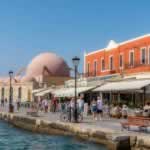 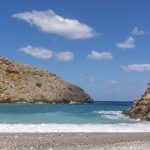 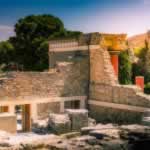 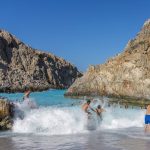