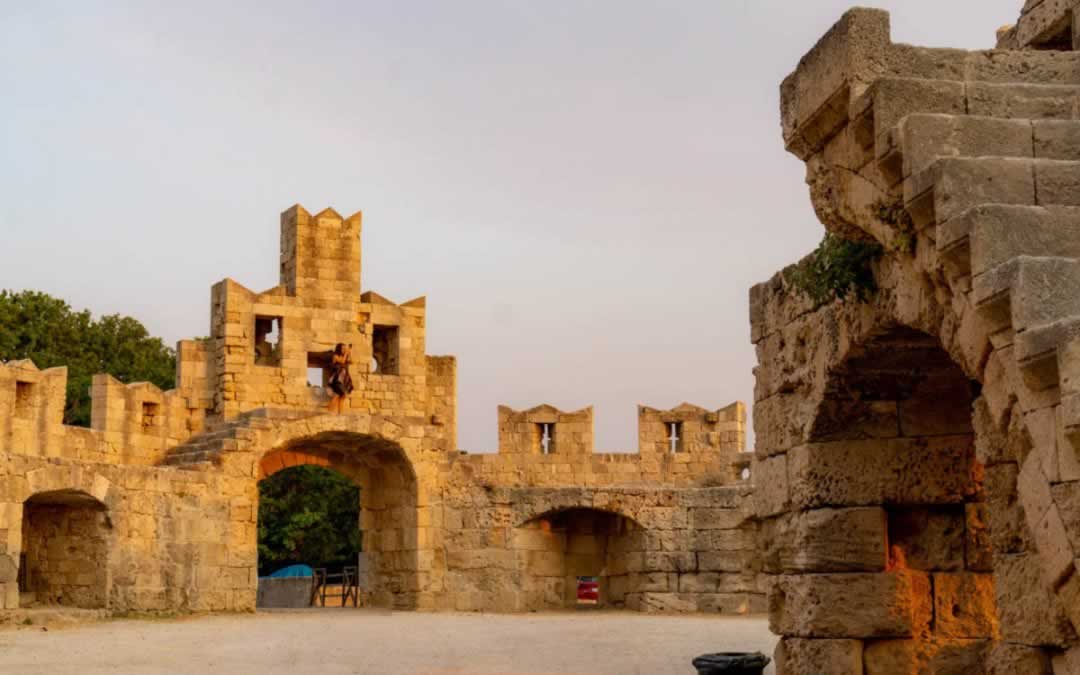 Rhodes is home to one of the best preserved medieval cities in Europe and one of the most interesting UNESCO World Heritage Sites. This is one good reason to visit this island. It is also a very good reason to choose accommodation in Rhodes Town instead of the beautiful Lindos or the merry Faliraki. Here are some of the point of interest in the Medieval City of Rhodes and the best things to do in the Old Town. 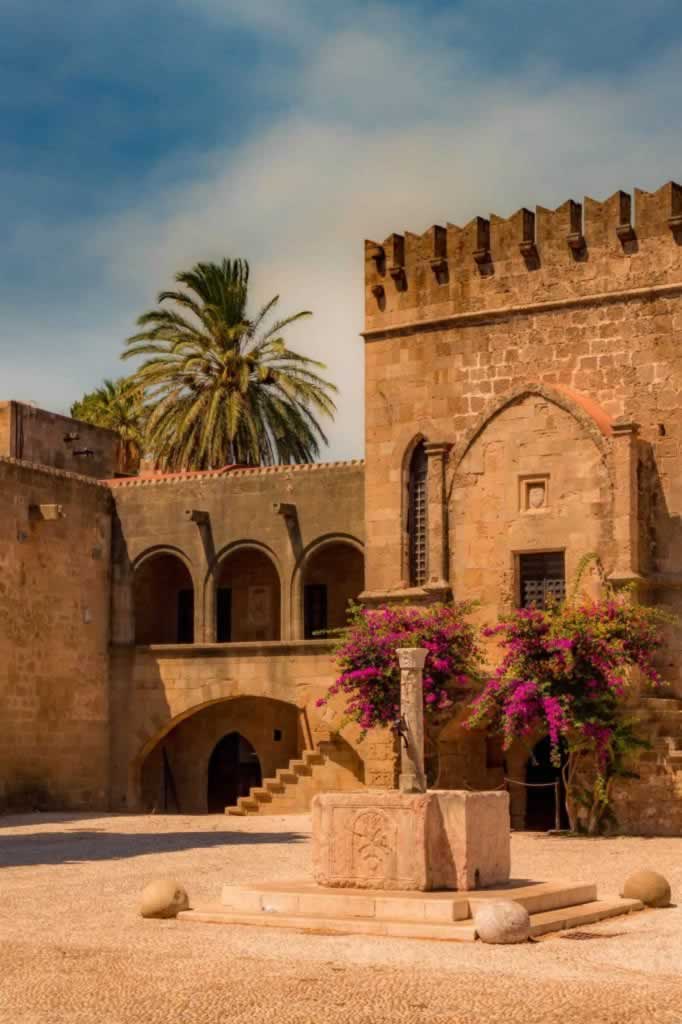 Guided Tours of the Old Town of Rhodes

If you already know what you want to see, check out these tours of the Medieval Rhodes Town:

– Rhodes Town Night Tour with Dinner and Cruise – click here to see more details and to book your tour now.

The Fortifications & The Gates

Built by the Knights Hospitaller on the remains of Byzantine fortifications, the stone wall surrounding the Medieval City of Rhodes is 4km long. I don’t know how well you can depict such a huge wall in your mind. You walk, and walk, and walk and everything you see is just this tall wall with ramparts and towers. 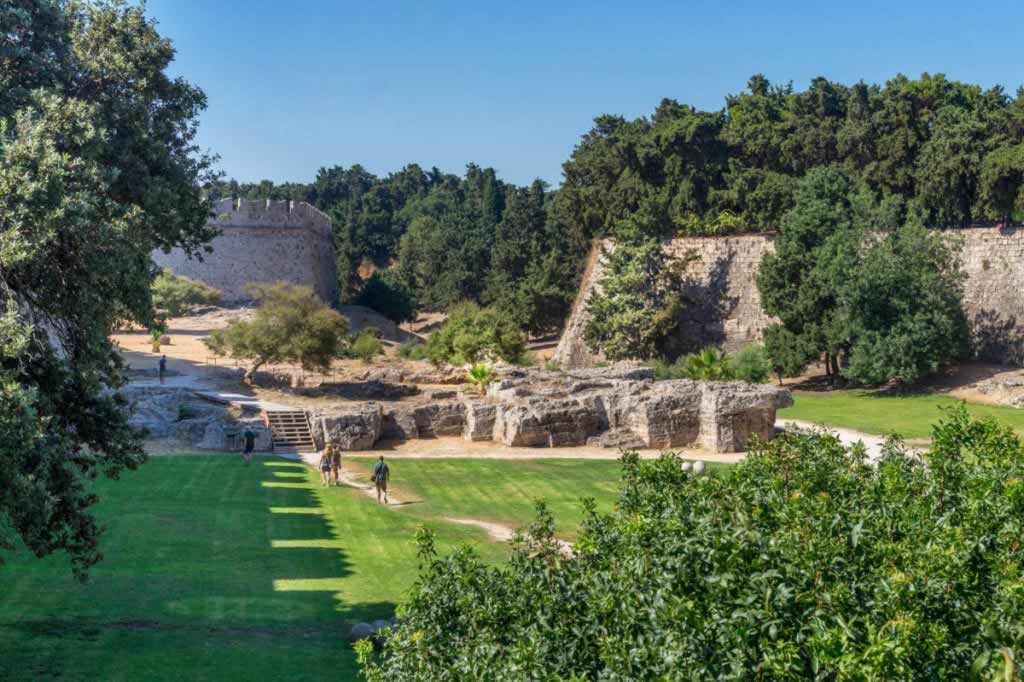 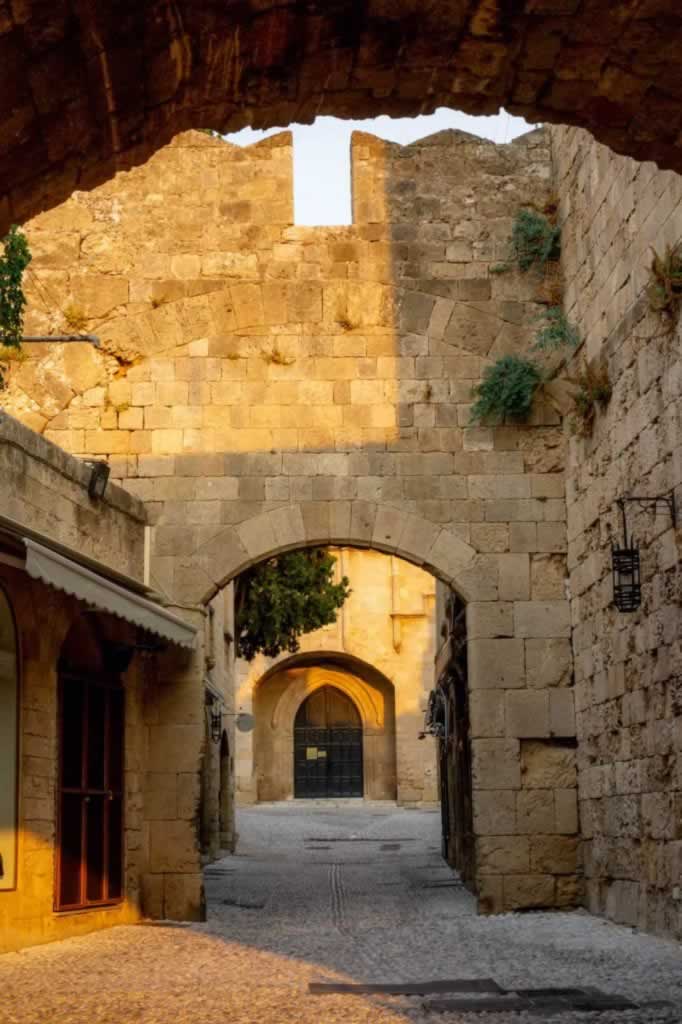 Every now and then you find a gate to the city. There are 11 gates in total, each of them with its name and its own history. Also, these gates look different to one another.

While in Rhodes Old Town, I had no idea those gates had names. I only saw them as means to enter the Medieval Citadel. I don’t even know if I visited all of these gates. Anyway, let’s see the ones I saw, I liked and I photographed. I might have mistaken the names of some of these gates, but what actually matters is that they look fabulous.

Gate of Amboise is the most spectacular entrance to the Medieval City of Rhodes. To get to the Amboise Gate, you need to cross a stone bridge over the moat surrounding the fortifications. The gate is flanked by two massive towers with rounded roofs. The fortification above the gate bears a marble relief that marks the year when this gate was built (1512) and the coat of arms of Grand Master Emery D’Amboise.

Even though the gate is huge, it seems small when you compare it to the two towers surrounding it. 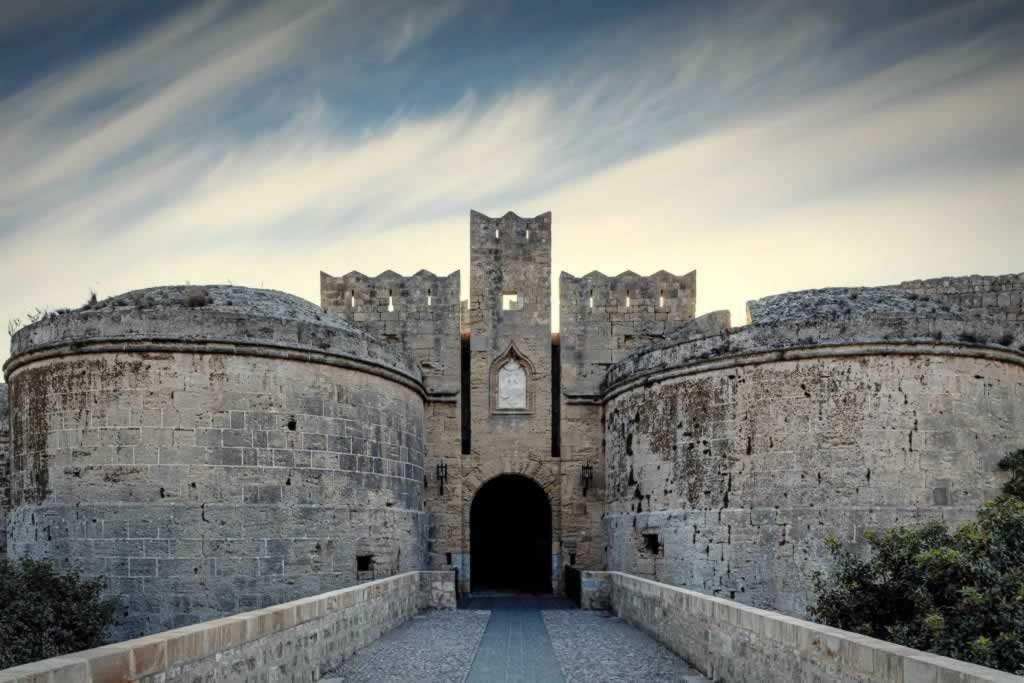 Ass you pass through the gate, you cross a dark corridor and three other gates to enter the citadel. The Knights of Rhodes built all these defense structures to protect the town from the Ottomans.

Saint Anthony’s Gate is only 200m away from D’Amboise Gate. In fact, the Knights redesigned the walls to make this narrow entry part of D’Amboise Gate, the last defense, the innermost entrance to the Old City of Rhodes. 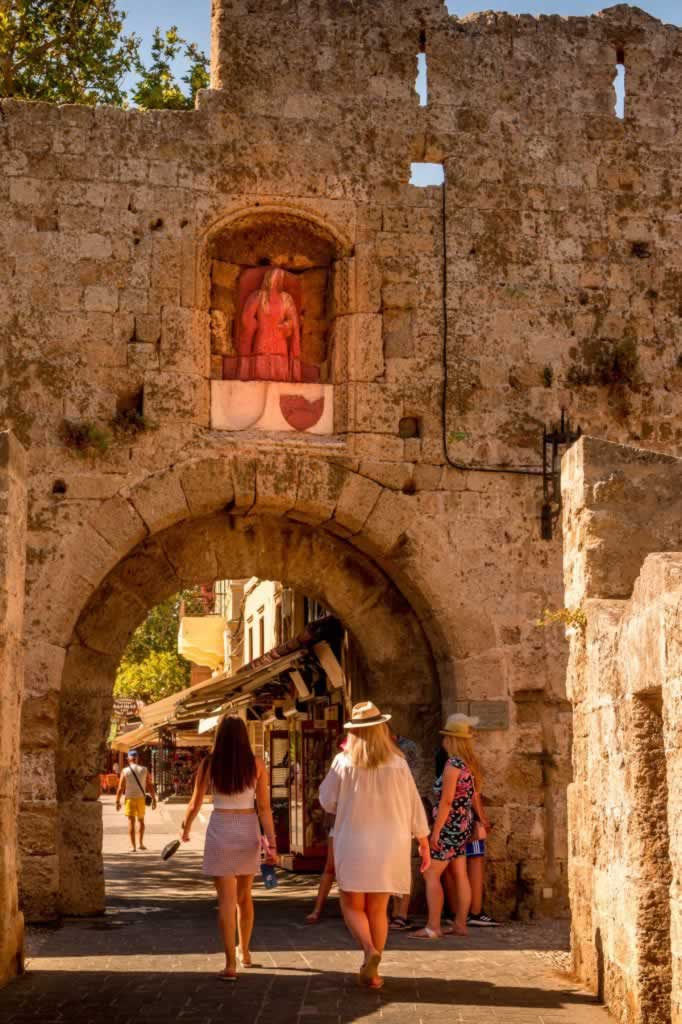 This is the closest gate to the Palace of the Grand Master of the Knights of Rhodes and to the upper ending of the Street of the Knights.

This is the busiest of all gates to the Medieval City of Rhodes. Designed for both pedestrians and motor vehicles, Liberty Gate makes the connection between the Old Town and Mandraki Port. 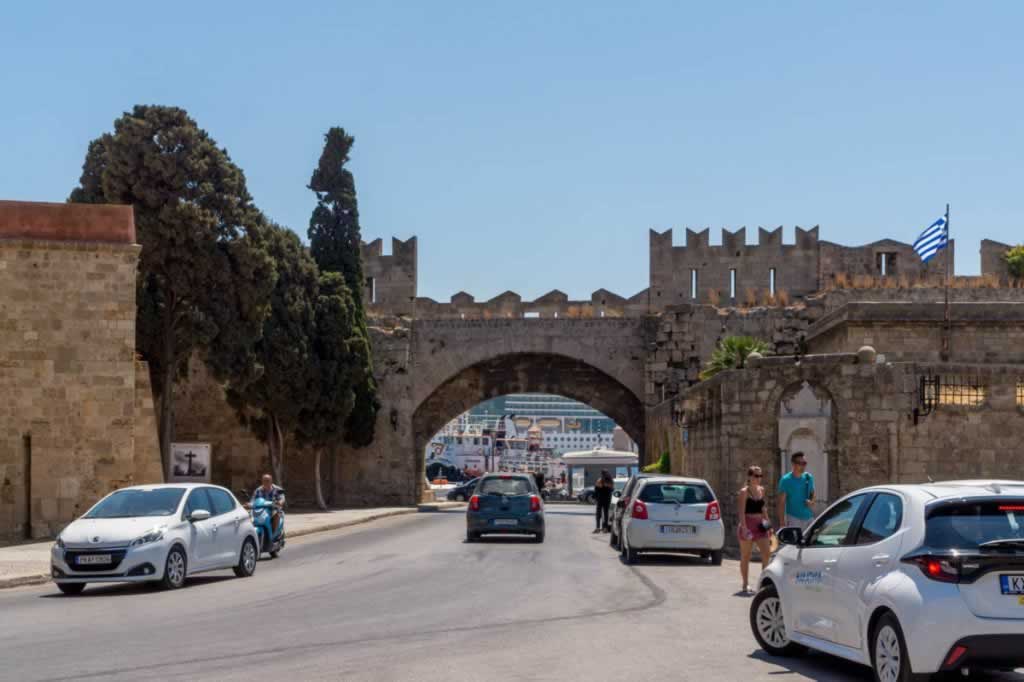 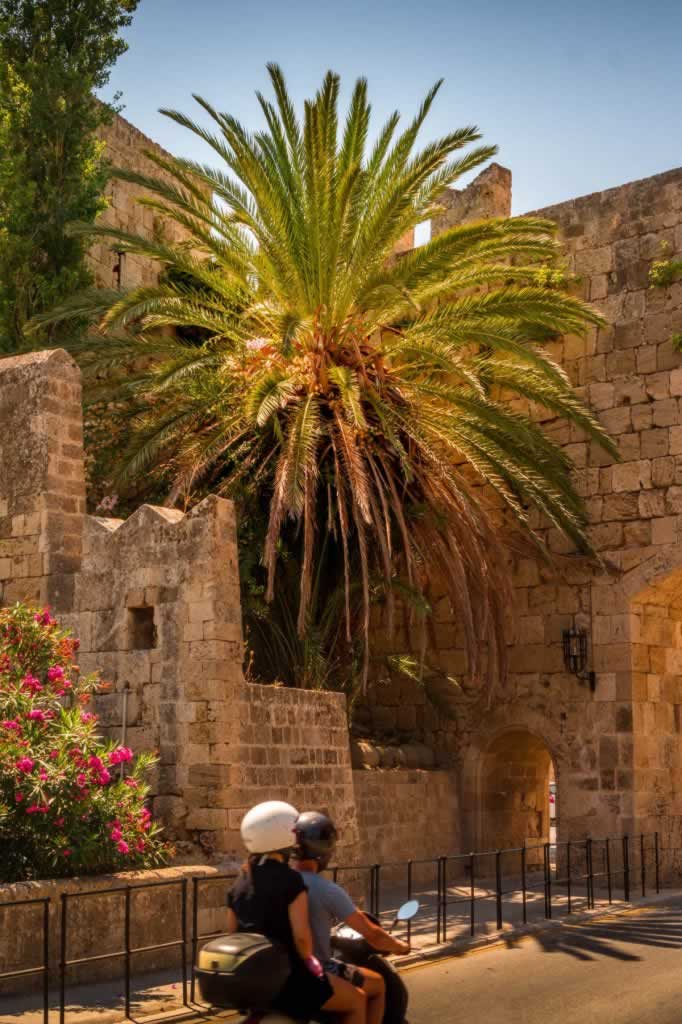 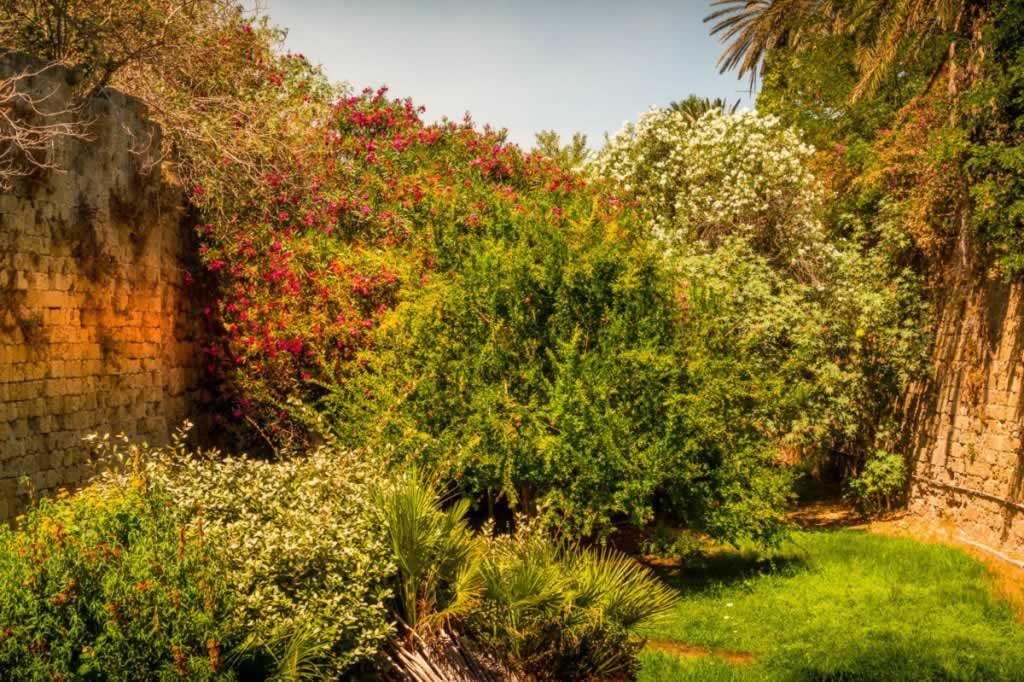 When you enter the Old Town through Liberty Gate, you’ll find the Rhodes Municipal Gallery, the Temple of Aphrodite and the Square of the Hebrew Martyrs. If you keep going, you’ll reach the lower end of the Street of the Knights and the Archaeological Museum of Rhodes (the former Hospital).

Gate of the Arsenal

The Gate of the Arsenal (Pili Tarsana) connects the commercial port of Rhodes to the Old Town. On the top of this gate you can see the coat of arms of Grand Master Juan Fernandez de Heredia, who built this entrance to the ancient citadel. The Gate of the Arsenal is a modern building that has direct connection to Liberty Gate, thus enabling vehicles to circulate between Kolona Harbour and the old town.

The Arnaldo Gate is also near the Liberty Gate. It allows fast access to the Archaeological Museum of Rhodes.

The Marine Gate used to be the main access point from the harbour to the old town.

Gate of the Virgin

This is a modern gate named after the nearby church of Virgin of Chora.

Gate of St Paul is my big time favourite of all gates of the Medieval City of Rhodes. It allows access to the fortified citadel and to Kolona Harbour. 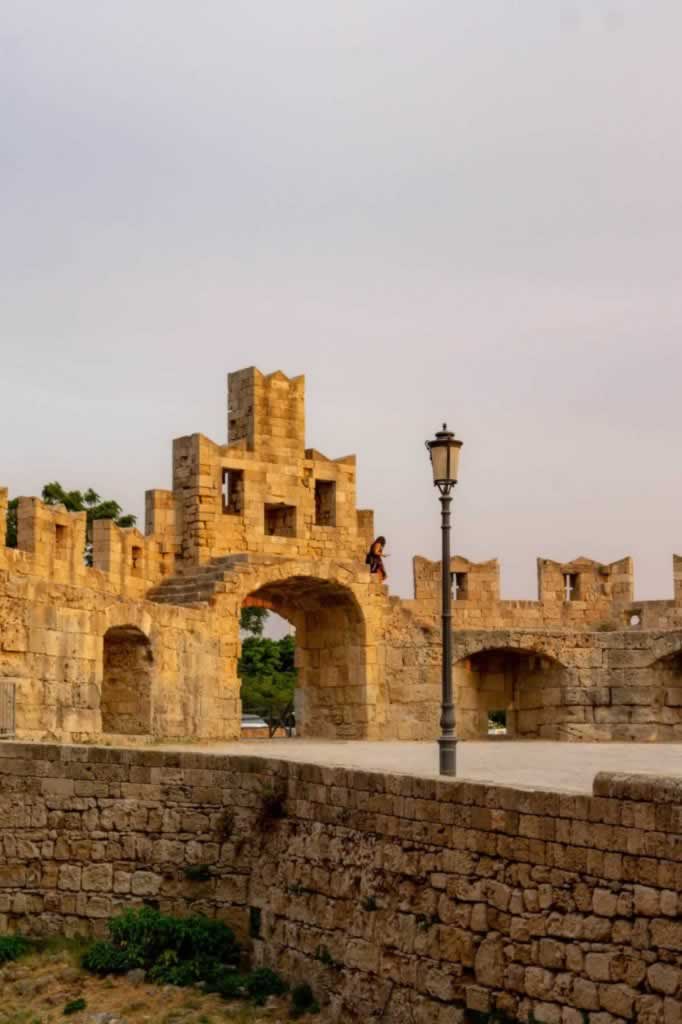 The best time of day to visit Saint Paul’s Gate is the sunrise. Try to capture the sun rays sneaking through cracks and windows. Wait for some boats to pass and be creative with your shots. 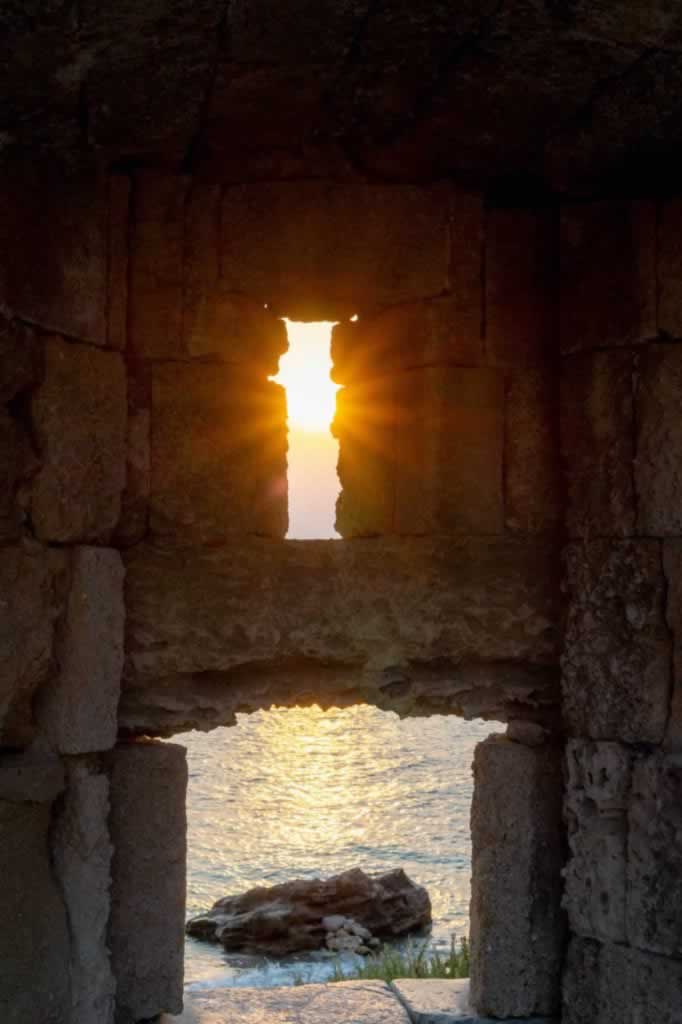 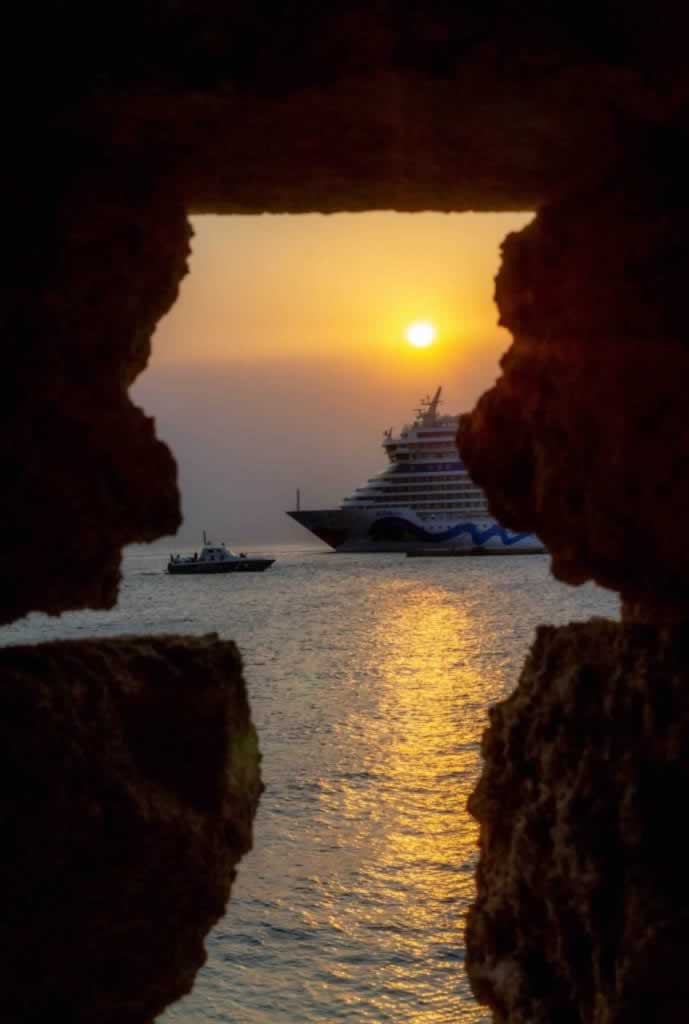 The Upper Town & The Lower Town

The Upper Town is all Gothic. That’s how the Knights wanted it. They had even built a wall to create an enclosure where only members of their order were allowed to spend the night. That wall doesn’t exist any longer, but you can clearly see how in the upper part of the Rhodes citadel all buildings have that severe Gothic look, with barely any plants, and no balconies.

On the contrary, the Lower Town bears the marks of all other civilizations that inhabited Rhodes. There are mosques, minarets, public baths and many other Ottoman-style buildings.

The Street of the Knights of Rhodes

The Street of the Knights deserves its own article, because of its historical significance. This is where the knights lived, grouped by tongue, in one of the seven inns on this street that connected the Palace of the Grand Master with the town and the harbour. 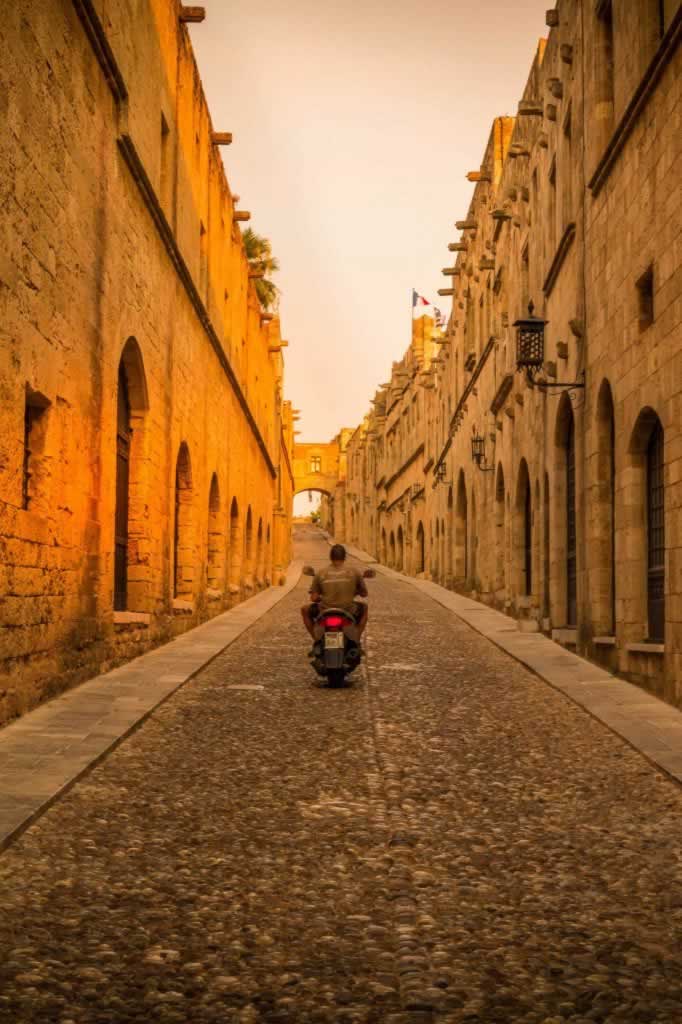 The Palace of the Grand Master

This palace is now a museum. It is a rectangular building with an interior courtyard (also rectangular). If you want to know more about visiting this museum, check out my article on the Palace of the Grand Master of the Knights of Rhodes. 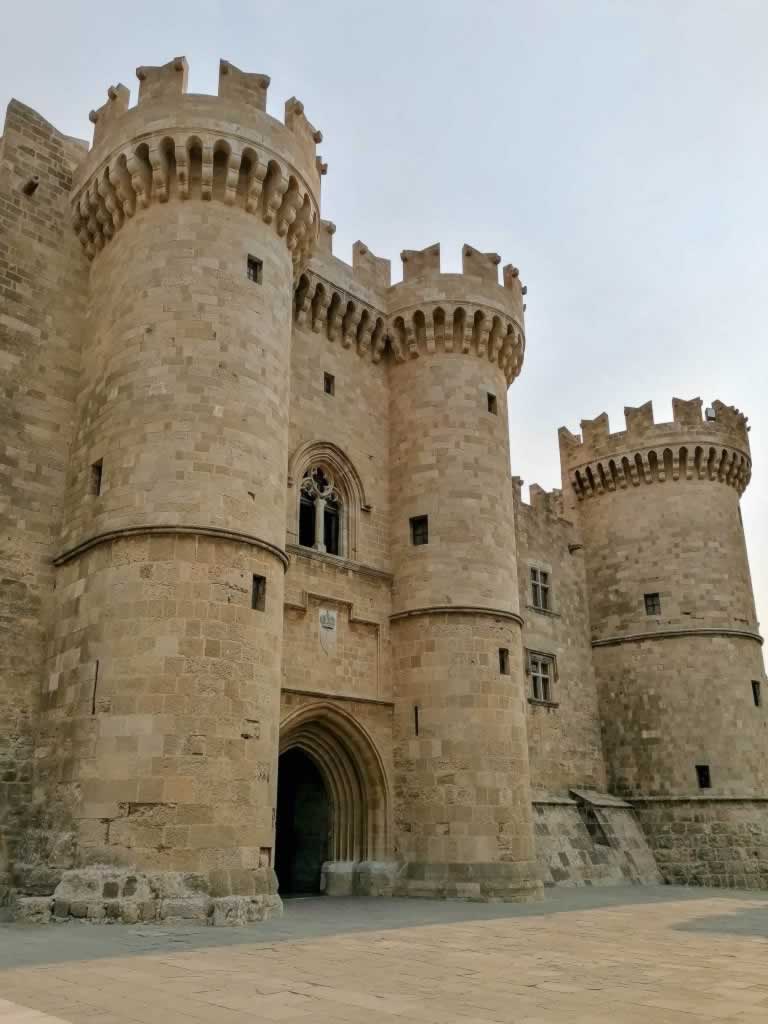 The Archeological Museum of Rhodes

The Archeological Museum of Rhodes is located in the former Hospital of the Knights of Saint John. Here’s official information on the ticket prices and visiting hours. 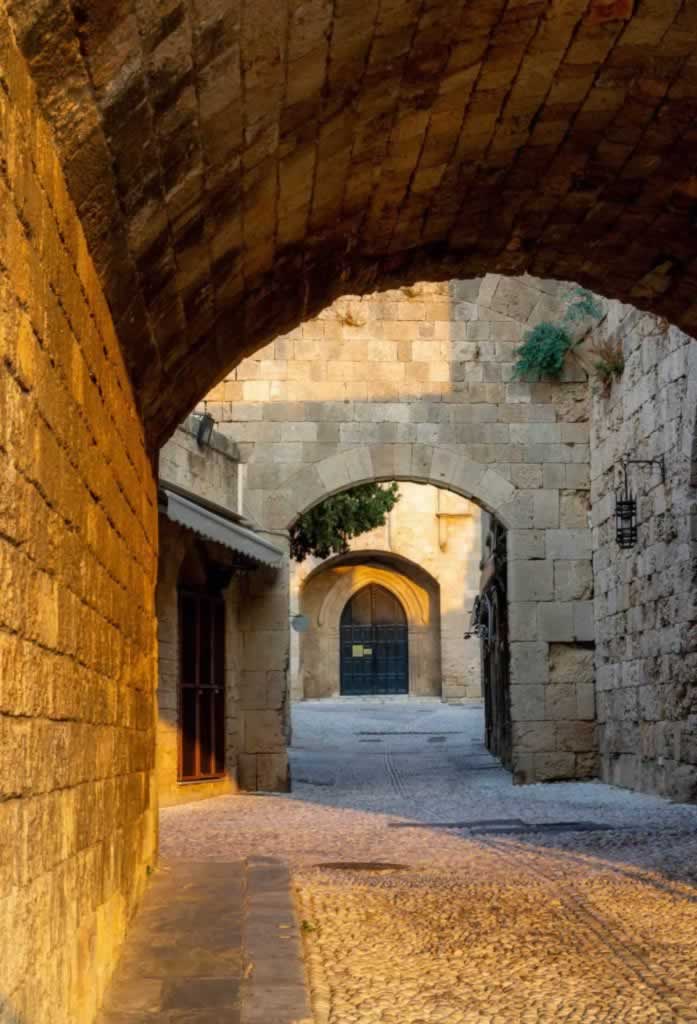 The Ottoman Remains & The Turkish Quarter of Rhodes Town

In the photo below you can see the Suleymaniye Mosque (view from one of the windows of the Palace of the Grand Master of the Knights). 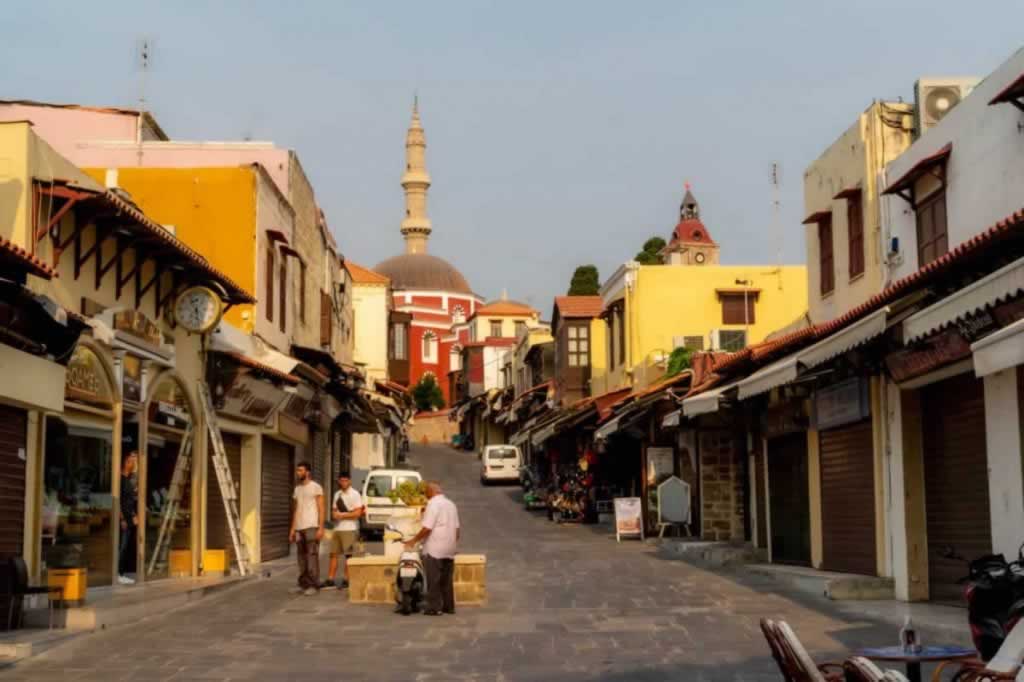 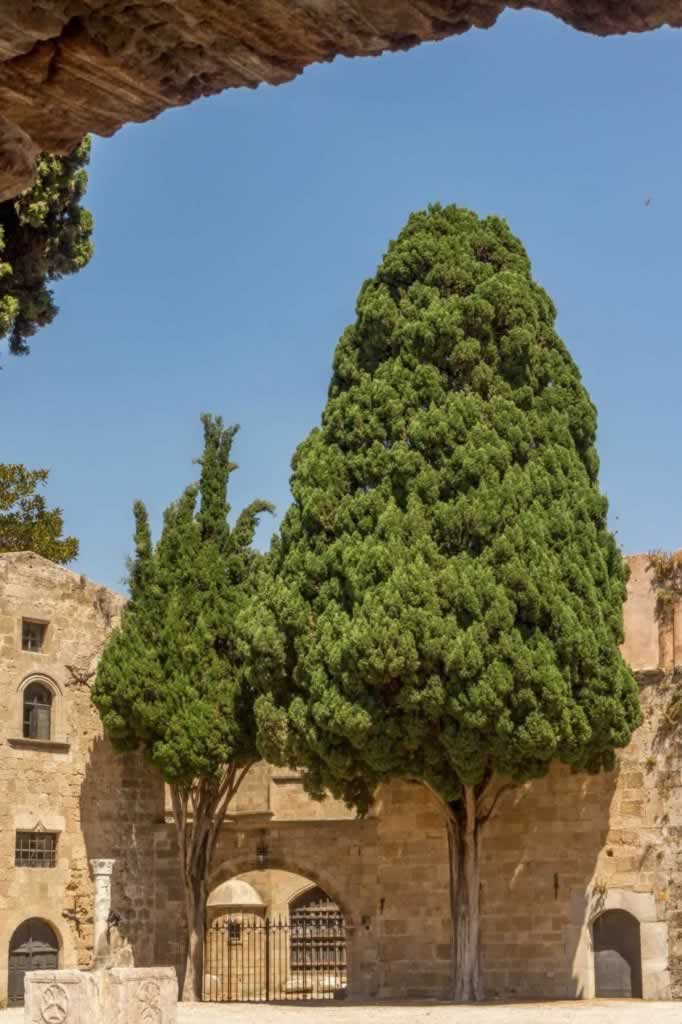 The Turkish Quarter stretches between Socrates Street and Pericles Street. It is a lively area, with lots of shops, Turkish fountains and very old buildings. The old Mosque of Aga is right in the middle of the street: 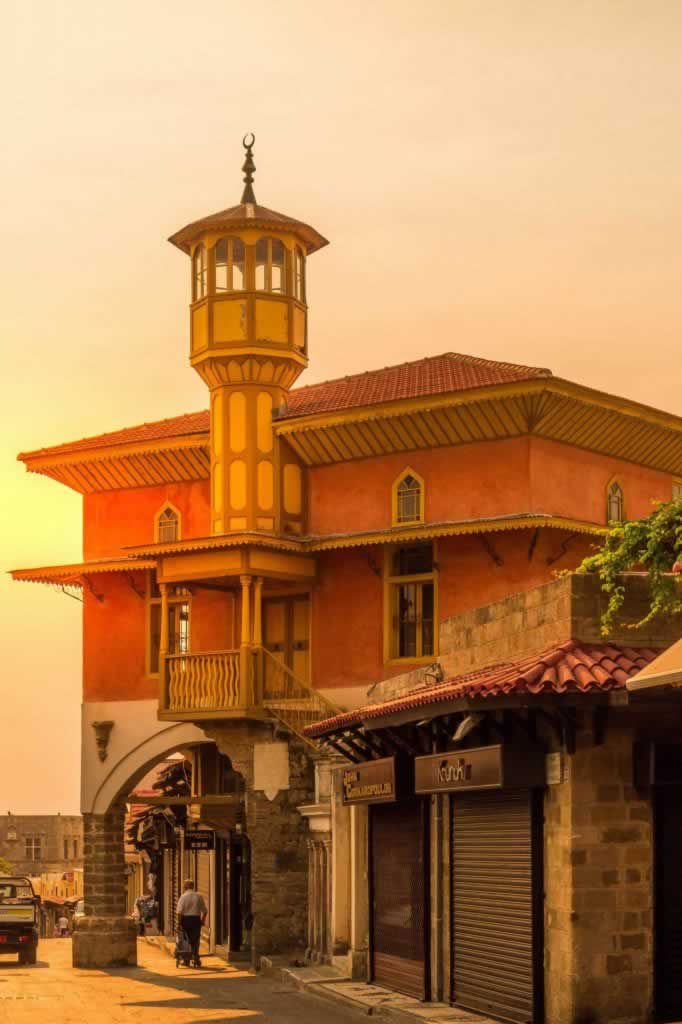 There’s also an old Muslim library which looks amazing. Due to COVID-19 restrictions, the library was closed during the summer of 2021, when I visited The Medival Citadel of Rhodes. I managed to capture a shot of the gardens and of the old wooden door on this library.

This is one of the Rhodes Old Town attractions you can visit. Climb to the observation deck at the top of the clock tower to enjoy a panorama of the Medieval Citadel of Rhodes. 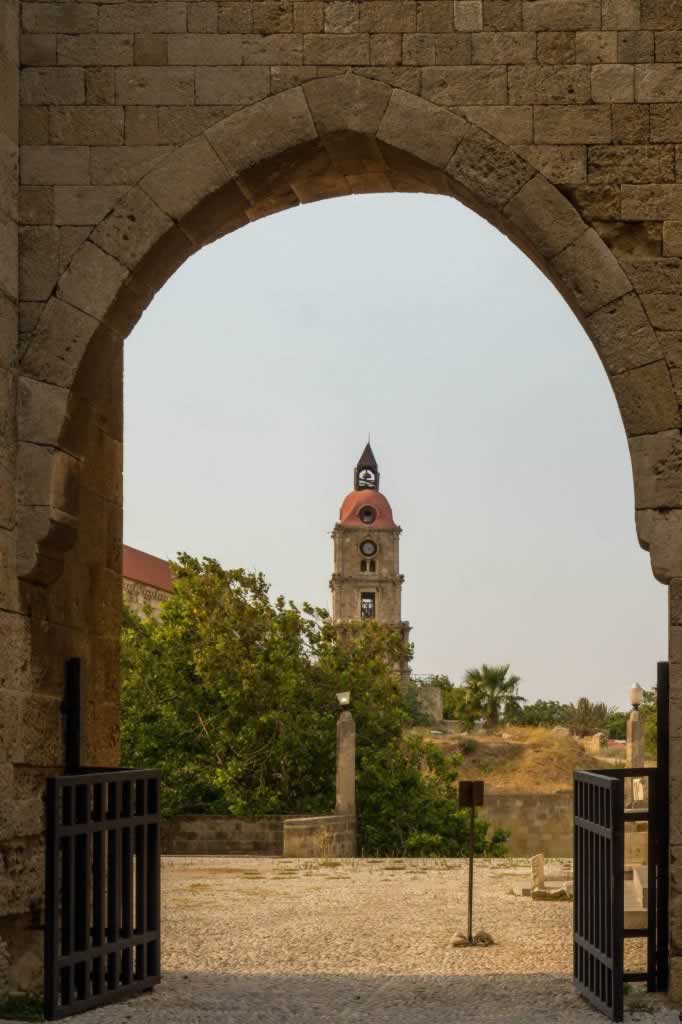 Here’s the entrance to the Roloi Clock Tower: 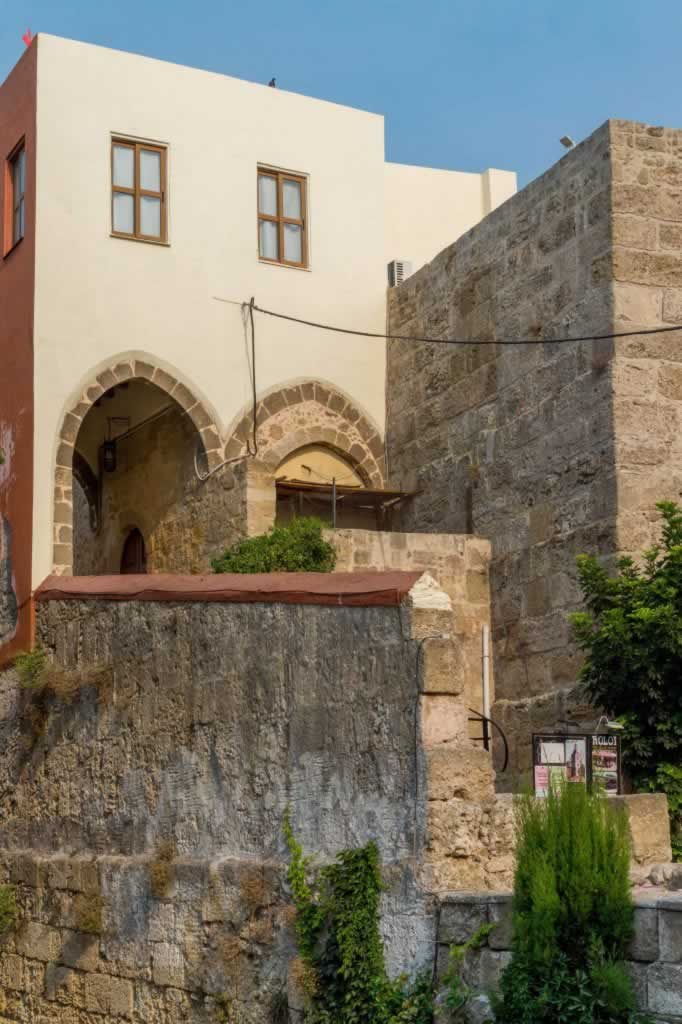 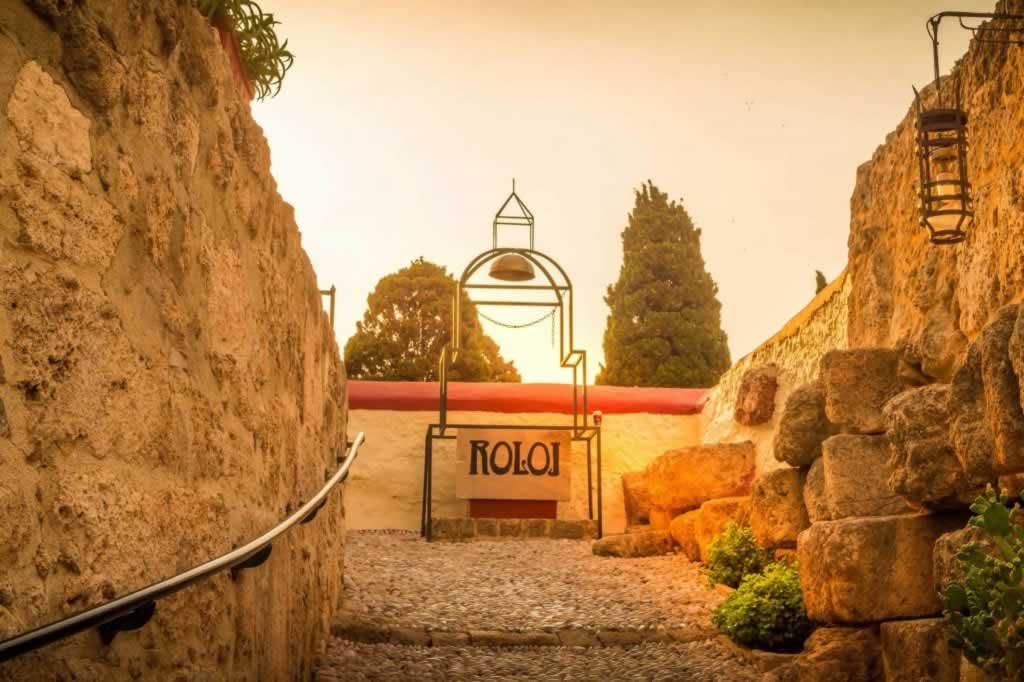 Have you visited The Medieval City of Rhodes? What was the building that impressed you the most? 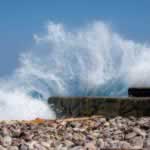